Quartermaster excused health reason.
Post 1650 had 3 attend.  Trophy for most attending  was Post 9271 (6) members.
100% membership: 6 out of 16 Post qualified. It was down to needy 11 members for District yesterday. Do what you can do to get new members.
1, All state qualified and no All American.
Old minutes approved
Andy of Post 1650 brought in the suitcase of paperwork from Jim W. QM.
Teacher (2) awards for 50 dollars approved.
Community service for District 1 was great. Almost record number of hours of community service plus.
The service gets us a grant for the VFW.
Endowment Scholarship: 75 applications. We need more.  Endowment position open in State election of two meeting a year.

VOD/ Pat awards should be set up as you do JROTC for this year.
EMT award: need more.
Teachers award: only 4 applications. Set it up with the other High School and middle school awards too.
Student Veteran awards in April: The state rep was at the meeting. I mentioned Chris Bowers in Topeka Post.
American/ Homeless Vets/ Employment Sign in on the website to partake in this.
Jobs: Career Fairs in KC. Hireavet.com
There are many days days of appreciation of Veterans: Flag day, Memorial day, July 4th, Sept. 11.
PDST Mental Health Wellness campaign; Use the VA and local community as workshops.
VFW Riders Post 56: Leavenworth Cemetery Memorial Day.
June 29 2019 will ride from here to Orlando Flo. of the National Convention in Flo.
Legislation: Appointed election of by-laws and counsel admin.
Post 12003 Vets parade of 100th Anniv. in Leavenworth, check  web site.
Youth: Fishing on May 5th 2019
Poppies in May on your report to buy some.
Unfinished Business:
Consolidation of two Post 12073 and 56 in Leavenworth. 32 member join along.
It is better than elimination.
New Business:
June 7 to 9 VFW State convention. Receipts  to keep for hotels report in Hutchinson Ks. Donation of 300.00 dollars for Hospitality room for District 1
approved.
State officer nominations: State nomination of officer is Tim of Post 56.
Convention Corp.; Post 56 will be working on that. Convention ad books order forms.
National Convention: send one delegate from each Post to Orlando Flo.
Post 1650 is sending Curtis G.
School of Instruction: next meeting.
Eisenhower Memorial stand Post from 8 AM to 12 AM on June 5 2019 on Wednesday.  WWII come along  to memorial too. Agenda will be coming soon.
Quarterly Audits are due this month. News Bulletins send them in.
Election report: bad emails and bad address that come back. Need to update roster of Post and send upward.
Nominations all approved. New District Commander, new Sr. Vice Commander, New Jr Vice Commander, District Quartermaster: Jim W. of VFW Post 1650.
District Chaplain: Art Brennan. New District Judge advocate,
New District Surgeon, New 3rd year trustee.
Appointed position needed: Inspectors/ officer of the day/ Service Officer.
District business closed. prayer
Done.
Congratulation to all the officers elected to position.
District Quartermaster Jim W. of Post 1650
District Chaplain Art B.  of Post 1650
When each Post got up to give a 3 to 5 minutes of the events and activities.
Post 1650: I stood up and told them that we had Founders day and 90th anniv.
with awards and pins.  Charter member of WWI with Memorial at 10th and Gage memorial with bricks.
Yard sale.
Kansas National Guard museum in June for Korean vets. and a meal.
Membership, membership and membership. I told them of our raffle to get a new member for 3 tickets. I offered a new membership as I have 3 tickets.
POW/MIA in May recognition. Girl Scout project in the "Last Call Lounge" to redo the heroes wall.
I was doing the admin. training on the website on Tuesday training day.
We were at the legislation day at the State house on Korean recognition day March 27 and Viet Nam vets was on march 29th.
Guest speaker was Ken Romine:
Spoke on the customer service to veterans that need to have an answer to their questions. 833-VFW-Vets phone number and talk about anything in need.
Art Brennan: District 1 and VFW Post 1650 Chaplain 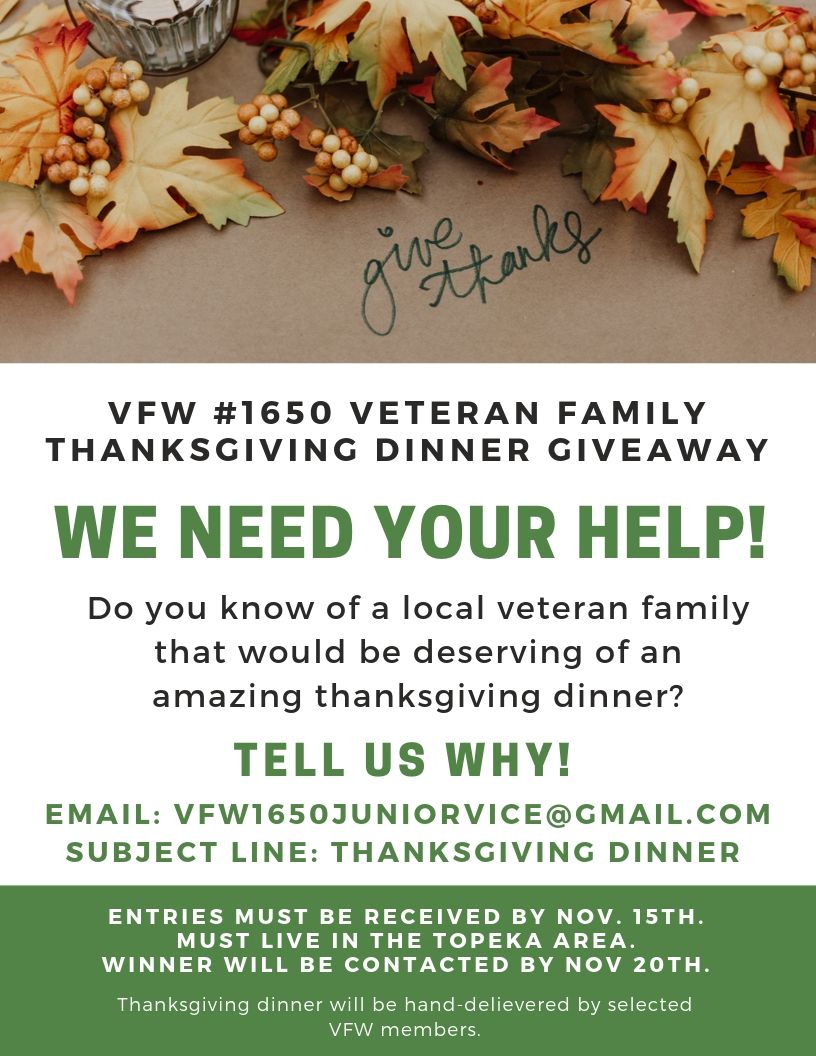 Crazy to think that Thanksgiving is only a few weeks away and the holiday season is almost upon us again. We need your help in finding a deserving local veteran family to share a Thanksgiving meal with. If you know of someone please reach out to us via email and share their story with us. Please like and share this post as someone you may know also knows of a family.
Send an email to vfw1650pr@gmail.com if you know a Veteran Family we can support!


Our volunteers/staff maintain the office of the hours.
Use our new phone system to contact the person you need to talk to.
Each has an extension to contact with them.
Example: Contact VFW Post 1650 Chaplain Art Brennan ext 6 is his ext.
call the number and wait for the ext. to come on.
Your call is important to us. We will contact you when you leave a message on our extension.
Veterans: Thank you for your service.